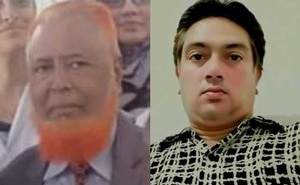 Bangladesh loses four doctors to COVID-19 in a day

Posted by: editor in All news, Assignment, Health 0 180 Views

As many as four physicians have died from the respiratory illness caused by the novel coronavirus in Bangladesh on Friday when the country reported record daily deaths from COVID-19 and cases.

Dr Haq, an associate professor of ophthalmology department at ZH Sikder Women’s Medical College, breathed his last at the Kurmitola General Hospital in the evening.

He was shifted to the intensive care unit of the hospital after his condition deteriorated on Thursday, said Dr Rahat Anwar Chowdhury, joint secretary of the Foundation for Doctors Safety Rights and Responsibility or FDSR.

Dr Haq, who served the Health Directorate as a physician, was a freedom fighter. He joined Sikder medical college after retiring from public service.

Dr Arif, a private practitioner, was taken to the Chattogram Medical College Hospital’s ICU when his condition worsened in the night after six days of battle.The former student of Faujdarhat Cadet College died later at the ICU, Dr Rahat said.

Cardiologist Dr Monowar and paediatric surgeon Prof Zahirul, died earlier in the morning as the disease continues to take a toll on the medical professionals in Bangladesh.

Prof Zahirul of Bangabandhu Sheikh Mujib Medical University or BSMMU lost the battle for his life at the Dhaka Medical College Hospital in the early hours.

He had tested positive for COVID-19 a fortnight ago but was admitted to the hospital last week as his condition took a turn for the worse, according to BSMMU Vice Chancellor Kanak Kanti Barua.

Prof Zahirul’s oxygen saturation level was dropping. As a result he was moved into Dhaka Medical College’s ICU,” he said.