Read the text and answer the following questions 5, 6, 7, 8 and 9.
There are many birds found in our country. Birds have feathers. They have wings and most of them can fly. The penguin and the ostrich are two of the few birds which cannot fly. They aren’t found in Bangladesh. The humming birds are the smallest birds in the world. They are not found in Bangladesh. The crow, the sparrow, the doel, the shalik, the kingfisher are the common birds of Bangladesh. We also see cuckoo in the spring. Its voice is very sweet. That’s why people like and love this bird most. Parrots and mynah birds can talk. People keep these birds as pets. They keep them in cages. Birds are not happy in cages. Birds are warm blooded. Most birds are very light. Their bodies are shaped like aeroplanes. Birds have strong wing and chest muscles and very light hollow bones. These help the birds fly. After a male and female bird mate, they build a nest. Birds build their nests in all kinds of places. Usually, the nests are high up in trees. Some birds, sparrows, build their nests in walls and cliffs. The cuckoo does not build a nest. The female cuckoo lays her eggs in crow’s nests. Most birds lay two or three eggs. Eggs have to be kept warm, so one of the birds sits on them. Soon the baby birds hatch. The chicks are usually blind and bald. They have to be fed by the adult birds.
5. Write only the answer.
a. Which of these birds cannot fly?
i. Hen ii. Dove iii. Parrot iv. Penguin
b. Usually, birds build their nests in high places because —.
i. birds live in trees
ii. high places are easy to fly
iii. the eggs will be safer
iv. birds need a quiet place to rest
c. Birds build their nests to —.
i. live in ii. lay eggs
iii. store food iv. sleep in
d. The mother birds lay eggs in the nest, because —.
i. it will be easy to hatch
ii. she needs a quiet place
iii. the eggs will be safer
iv. nobody will take away the eggs
e. Generally, how many eggs are found in a nest?
i. one or two ii. two or three
iii. three or four iv. four or five
f. Baby birds —.
i. feed themselves
ii. are fed by their father
iii. are fed by their mother
iv. are fed by their parents
g. Which birds can talk?
i. Cuckoo and kingfisher
ii. Mynah and parrot
iii. Shalik and sparrow
iv. Cuckoo and doel
h. We hear the cuckoo in spring, because —.
i. it sings sweetly
ii. we see it only in the spring
iii. its voice is weak in the spring
iv. other birds do not sing in the spring
i. Most birds can fly, because —.
i. they have feathers ii. they have wings
iii. they are small
iv. they have strong muscles
j. Which birds are not found in Bangladesh?
i. ostrich and cuckoo
ii. humming bird and penguin
iii. penguin and parrot
iv. humming bird and mynah.
Answer to the question no. 5
a. iv. Penguin b. iii. the eggs will be safer
c. ii. lay eggs d. iii. the eggs will be safer e. ii. two or three f. iv. are fed by their parents g. ii. Mynah and parrot h. ii.we see it only in the spring i.ii. they have wings j. ii. humming bird and penguin. 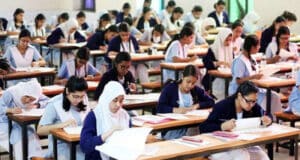