The government has extended the closure of all secondary and higher secondary educational institutions till July 31, as a preventive measure against further spread of coronavirus.

The decision will be applicable for Ebtedayee and Qawmi madrasas across the country, according to a press release.

Based on recommendations by the advisory committee on Covid-19, the government has taken the decision considering the safety of students, teachers, employees and guardians.

Desk,29 sep:
The government will formally announce the decision about reopening of schools and colleges, and holding exams amid the coronavirus outbreak “very soon”, Dipu Moni has said.

The education minister spoke about the plan with reporters after a programme at International Mother Language Institute in Dhaka on Tuesday.

She said she will take questions from the journalists at a news conference scheduled for Wednesday.

Dipu Moni has called the news conference to brief the public about the “overall situation” amid concerns of students and parents over the coronavirus outbreak.

She is expected to talk about whether to extend the shutdown of institutions beyond Oct 3 and when to hold the postponed HSC exams.

The educational institutions have been shut since Mar 17 when the government confirmed the first cases of COVID-19.

With the end of the year nearing, students and parents are worried how the promotions to the next classes will take place and what will happen to the lost lessons. 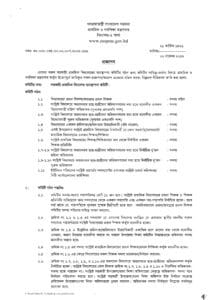 Primary and Mass Education Secretary M Akram Al-Hossain has announced to reduce the schedule during the attendance of teachers and students in primary school.
He said this at a meeting with the primary teachers at the Collectorate School ground in Chuadanga district on Friday.

Secretary said that it is not possible to accept new routine students.
For a long time, small children do not want to go to school. Likewise, teachers’ mentality is difficult to keep up. According to the class routine, a child has to come to school at 9 am. And at 4:00 pm. He said a plan to shift all schools is going on. The changes that will be made in one shift will be changed. If it is possible in 5000 schools in the first phase, then 5000 schools will be implemented.
The meeting was chaired by Chuadanga Deputy Commissioner Gopal Chandra Das on Friday morning. Primary and Mass Education Secretary Akram Al Hussein. The meeting was arranged jointly organized by the district administration, Chuadanga and District Primary Education Office.

BPSC chairman Muhammad Sadique confirmed it to shikkhabarta after a meeting at his office on Tuesday.

The viva voice of 39th special BCS was completed on 7 March after the result of preliminary was published on 6 September, 2018.

On 3 August, the preliminary examination of the 39th BCS examination took place. A total of 13,219 passed the exam out of 37,583 candidates.

The results are delayed due to a move to recruit additional 2,250 physicians.